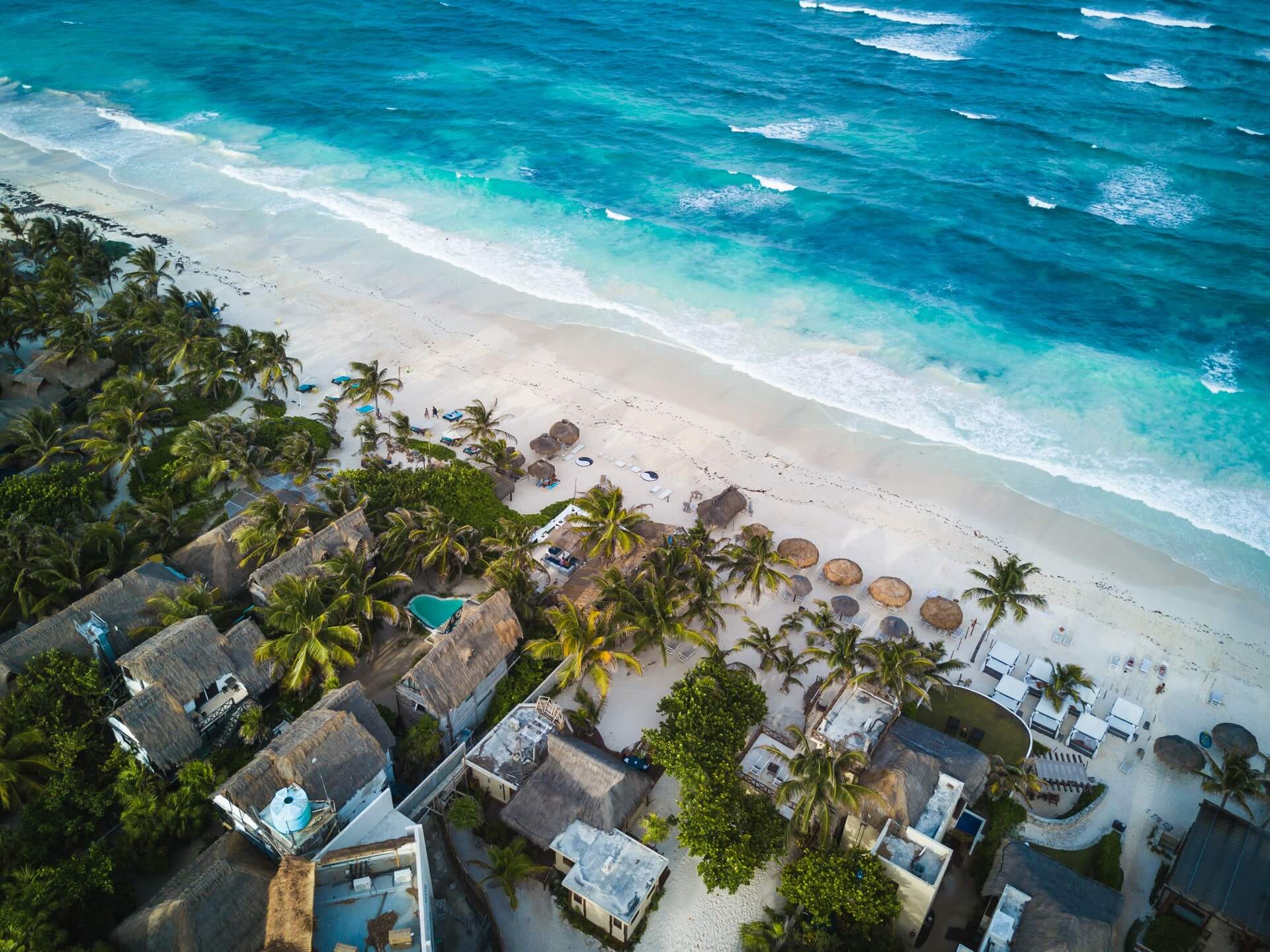 A two hour drive south of the famous beaches of Cancun lies Tulum, the little town rising in popularity in the same state of Quintana Roo. With an endless array of white sandy beaches as far as the eye can see, it’s not easy to find the best beaches in Tulum.

While Tulum may be famous for its popularity amongst social media influencers, yoga aficionados, great parties, and boho-style hippies, it’s mostly famous for its spectacular beaches.

The town of Tulum itself lies just west of the beaches, about 3 miles from the coast. Unfortunately because of this, you’ll have to take a taxi or rent a bicycle for the day to reach the beaches if you’re staying in the town. If you’re lucky (and rich) enough to stay on the beach itself then this won’t be a problem for you.

The beaches in the north are open to the public, wilder, less developed, and easier to access. The beaches to the south (or the zona hotelera) are home to all of the fancy resorts, beach clubs, and restaurants and are more difficult to access if you’re not staying there.

Unique to the beaches are also some ancient Mayan ruins such as the Zona Arqueológica de Tulum, a fantastic temple complex that dates back to 564 AD. That’s only one small example of what you’ll find on the beaches of Tulum, you’ll also find amazing cenotes, and below we’ll outline some of the best beaches in Tulum you can discover.

Perhaps the most famous beach in Tulum, thanks to Instagram influencers descending here to take selfies amongst the dramatic Tulum archaeological zone precariously perched on the 40-foot cliffside. Below the site is beautiful crystal clear water and a perfectly white, sandy beach stretching alongside the cliff off into the distance. The breathtaking beauty of this location makes it one of the best beaches in Tulum.

The ruins were once an ancient Mayan city between the 13th and 15th centuries which acted as the main port for Cobá, the inland city 30 miles from the coast. You’ll be able to find a wooden walkway heading down towards the beach, but make sure to come before 5 pm as the park and access close at that time.

Way further south of the ruins, you’ll find the longest and most popular stretch of beach known as Playa Paraiso, or “Paradise Beach.” It’s one of the widest beaches on the coast with spectacular powdery white sand and crystal clear water, which is initially made Tulum famous.

You’ll find many characters here from yogis, hippies, partiers, people just wanting to tan, and even Iguanas. There are a few restaurants and bars along the stretch, including Playa Paraiso Beach Club.

At this point, it becomes hard to distinguish one beach from another as most of them are all pretty much an interconnected stretch of white sand. North of Playa Paraiso is Playa Pescadores, or “Fisherman’s Beach.” As it’s essentially the same beach it shares the same perfect characteristics as the others.

It gets its name from the fishing boats anchored along the shore waiting to go out to find the catch of the day. The waves and surf are a lot calmer here which makes it easier for them, here you’ll also find families with kids enjoying the ocean. There are a couple of beach clubs here as well, including Kai which offers a chill atmosphere.

Further north of Pescadores towards the ruins lies Playa Santa Fe, once again pretty much connected to the same beaches of the previous two. If you’re planning on getting here from Playa Ruinas by walking along the beach, good luck. The rocky outcropping around Ruinas gets in the way. You’ll have to turn left once out of the archeological site then head down the road and find the sing to Santa Fe Beach Club, from there you’ll gain access to the beach and by default the previous two already mentioned.

Because it’s so close to the main access to the beaches and near the ruins, it tends to be one of the more crowded beaches. There are also public showers and bathrooms, so it has a lot more people planning on staying in that area for the whole day. Like the other areas, there are also plenty of restaurants, bars, and lounge chairs with umbrellas.

Now we come to Playa Las Palmas, and yes – you guessed it – it’s connected to the other beaches. The furthest beach south on the main stretch, below Playa Paraiso sits this also stunningly beautiful beach. So what’s the difference you may ask? It’s a lot quieter and more relaxed than the others with less of a crowd. In our opinion that makes it one of the best beaches in Tulum.

While it’s a lot further than the other beaches surrounding Tulum, it’s definitely worth the journey here as it’s for sure one of the best beaches in Tulum and the surrounding area. Further north of Tulum, this beach is a popular spot for turtles watching and releasing.

Located between the water parks Xel-Ha and Chemuyil, it’s a very remote beach which means there are barely any tourists here! It’s definitely a hidden gem, and one you can sometimes enjoy all by yourself! There’s also a small cenote near the beach to check out.

Further south of Tulum is the Sian Ka’an Biosphere Reserve, an amazing natural habitat home to all kinds of unique creatures such as turtles, jaguars, dolphins, hundreds of species of birds, and much more.

Because of its remoteness and being untouched by modern development and resorts, this makes it one of the best beaches in Tulum in our opinion. There are a few beaches here but Boca Paila is one of the nicest and most well-known. The beaches are easily accessible via parking lots nearby, but some more remote beaches require a bit more work and dedication to reach, but it will be worth it!

White not even in Tulum but further north is the small beach town of Akumal, it’s so nice we’ve made it an honorable mention. 30 minutes north you’ll find this pristine white sandy beach, where you’ll also find sea turtles calling this place home. It’s quite a busy spot with quite a few tourists but that’s for good reason, it’s a beautiful picturesque beach in the small town of Akumal.

Away from the crowded beaches is a cool beach club project called Papaya Playa Project, it’s something different to check, with a cool private beach, restaurant, and chill bar. It’s a good alternative to the hustle and bustle of the main beaches in Tulum. 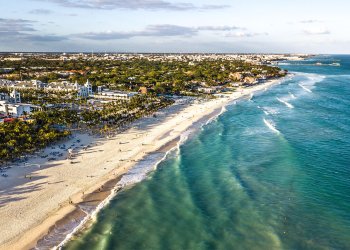 A Guide to the Best Beaches in Playa del Carmen 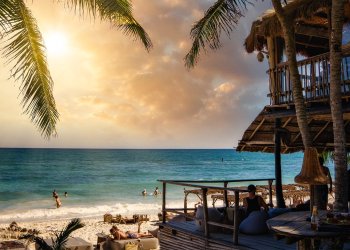